The association Yeshe Khorlo Europe has been created back in 1997 in Valempoulières (Jura), on the initiative of the 9th Gangteng Tulku (Kun-zang Rig-dzin Pema Namgyal).

In 1999, the association settled in the village of Blye, in the buildings of an previous children's holiday camp that were generously offered to His Eminence.

H.E. Gangteng Tulku Rinpoche inaugured the place on August 15th, 1999, and named it "Pema Yang Dzong", the Fortress of Padma (as a reference to the great Indian master Padmasambhava also called Guru Rinpoche in the Himalayas).

Since then, the association is know as Yeshe Khorlo Pema Yang Dzong. Its first purpose is to share and relay the immensely rich spiritual legacy and the extraordinary teachings of Guru Rinpoche (considered as being the incarnation of our enlightened guide bouddha Gautama Shakyamuni), who visited the kingdom of Bhutan in the 7th century, before going to Tibet. 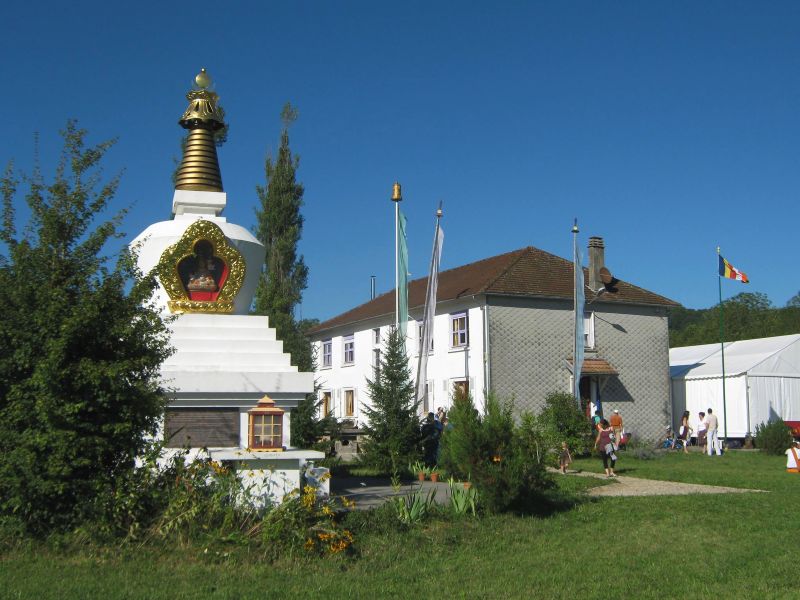 The originality of Guru Rinpoche is his legacy of teachings that are discovered in the form of termas (hidden spiritual “treasures” that are concealed in water, earth, rock or in the awareness of his disciples), through time.

Among the many tertöns (revealers of termas) who have appeared in Tibet and in the Himayas since the 11th century, let us cite the names of five tertöns kings (they are named "kings" as the termas they discovered cover the whole range of the cycles of the Guru, Dzogpa chenpo and the Great Compassionate): Nyang Relpa-tchen Nyima Euser, Guru Chöwang, Dorje Lingpa, Orgyen Pema Lingpa and Do-Ngna Lingpa (Djamyang Khyentse Wangbo).

His Eminence the Ninght Gangteng Tulku is the emanation of the Body of Orgyen Pema Lingpa, considered as the main reincarnation of the Omniscient Long-chen-pa. His Eminence Gangteng Tulku was born in 1955 in the Trongsa area, in the center of Bhutan, and was recognized by the incomparable Dzogchen master Polo Khenpo (of Tibetan origin, who came as a refugee in the kingdom of Bhutan).

His Eminence studied, among others, with H.E. Tenzin Töndrup, H. H. Dudjom Rinpoche, Dodrupchen Rinpoche, Chatral Rinpoche and the great Khenpo Rinchen from the Sakya tradition.

In 1985, with the support of His Majesty the King of Bhutan Jigme Senge Wangchuk, His Eminence founded the Shedra (center for buddhist studies Künzang Chöling, uphill and in front of Gangtey Gompa, and further on created a 3-year traditional retreat center next to the Shedra.

His Eminence gave his first teaching in Europe in Annecy, France, in the end of December 1987, and transmits with great assurance the teachings of Dzogchen, the pathway to awakening of awareness to its unborn and luminous reality.

His Eminence is visiting Yeshe Khorlo Pema Yang Dzong regularly, like he does with other Yeshe Khorlo associations in Germany, Austria, Switzerland, Poland to bestow Vajrayana and Dzogchen teachings.

Khenpo Karma Wangyel, his brother, is the resident lama at Pema Yang Dzong where he is teaching on a regular basis. Two other Bhutanese teachers reside and teach at Pema Yang Dzong: Lopön Kinley and LopönThuji.

Located in a very peaceful place, downhill the little village of Blye, the center provides a limited number of rooms for practicionners who wish to accomplish short or longer retreats. 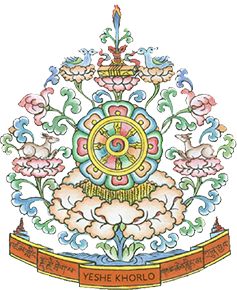